For more information on RID visit

To Catch a Deadly Germ

WHAT kills more than five times as many Americans as AIDS? Hospital infections, which account for an estimated 100,000 deaths every year.

Yet the Centers for Disease Control and Prevention, which are calling for voluntary blood testing of all patients to stem the spread of AIDS, have chosen not to recommend a test that is essential to stop the spread of another killer sweeping through our nation’s hospitals: M.R.S.A., or methicillin-resistant Staphylococcus aureus. The C.D.C. guidelines to prevent hospital infections, released last month, conspicuously omit universal testing of patients for M.R.S.A. 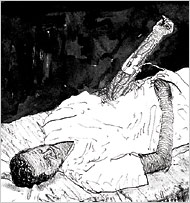 That’s unfortunate. Research shows that the only way to prevent M.R.S.A. infections is to identify which patients bring the bacteria into the hospital. The M.R.S.A. test costs no more than the H.I.V. test and is less invasive, a simple nasal or skin swab.

Staph bacteria are the most prevalent infection-causing germs in most hospitals, and increasingly these infections cannot be cured with ordinary antibiotics. Sixty percent of staph infections are now drug resistant (that is, M.R.S.A.), up from 2 percent in 1974.

Some people carry M.R.S.A. germs in their noses or on their skin without realizing it. The bacteria do not cause infection unless they get inside the body — usually via a catheter, a ventilator, or an incision or other open wound. Once admitted to a hospital, these patients shed the germs on bedrails, wheelchairs, stethoscopes and other surfaces, where M.R.S.A. can live for many hours.

Doctors and other caregivers who lean over an M.R.S.A.-positive patient often pick up the germ on their hands, gloves or lab coats and carry it along to their next patient.

In the 1980s, Denmark, Finland and the Netherlands faced similarly soaring rates of M.R.S.A., but nearly eradicated it. How? By screening patients and requiring health care workers treating patients with M.R.S.A. to wear gowns and gloves and use dedicated equipment to prevent the spread. The Dutch called their strategy “search and destroy.”

A growing number of hospitals in the United States have proved that such precautions work here, too. Recently, a pilot program using screening at Presbyterian University Hospital, in Pittsburgh, reduced M.R.S.A. infections by 90 percent. At a Yale-affiliated hospital in New Haven, screening reduced M.R.S.A. infections in intensive care by two-thirds.

And a recently completed nine-year study at the Brigham and Women’s Hospital, in Boston, found that screening led to a 75 percent drop in M.R.S.A. bloodstream infections among intensive-care patients and a 67 percent decline throughout the hospital. Earlier efforts to stop these infections by installing many more dispensers of hand cleanser and conducting a yearlong educational campaign on hand hygiene had no effect.

Some public health advocates recommend screening only “high-risk” patients — those who recently have been hospitalized, live in nursing homes or have kidney disease. Partial screening is somewhat effective, but universal screening prevents the most infections.

Can hospitals afford to screen for M.R.S.A.? They cannot afford not to. Infections wipe out hospital profits. When a patient develops an infection and has to spend many additional weeks hospitalized, Medicare does not pay for most of that additional care.

Treating hospital infections costs an estimated $30.5 billion a year in the United States. Prevention, on the other hand, is inexpensive and requires no capital outlays. A pilot program at the University of Pittsburgh found that screening tests, gowns and other precautions cost only $35,000 a year, and saved more than $800,000 a year in infection costs. A review of similar cost analyses, published in The Lancet in September, concluded that M.R.S.A. screening increases hospital profits — as it saves lives.

Yet, for a decade, the C.D.C. has rebuffed calls for screening, most recently from a committee of the Society for Healthcare Epidemiologists of America. C.D.C. officials claim that more research is needed to prove the benefits of screening. More research cannot hurt, but we know enough already to move ahead.

Some hospitals are leading the way, including Evanston Northwestern, in Illinois; the Veterans Affairs medical centers; New England Baptist Hospital, in Boston; and Johns Hopkins Hospital, in Baltimore.

The C.D.C.’s lax guidelines give many other hospitals an excuse to do too little. Every year of delay costs thousands of lives and billions of dollars.

Betsy McCaughey, a former lieutenant governor of New York, is the founder of the Committee to Reduce Infection Deaths.